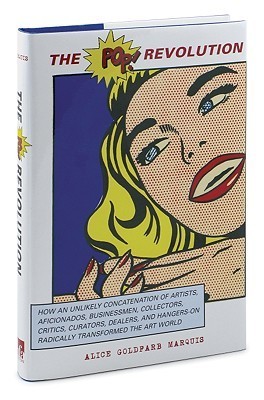 If you want to understand Pop art -- how it evolved, what it was all about, and meet the Movers and Shakers -- this is a splendid social history of the movement that shook up America in the 60s. Initially Pop outraged the usual suspects, particularly NYT critics John Canaday and Hilton Kramer. That paper played almost no part in what's now called the triumph of post-war 2 American art. Which no one remembers today. Journalist-critic Marquis introduces the vital (and under appreciated) art dealer Ivan Karp and reminds us that Warhol's first NYC show was at Eleanor Ward's Stable Gallery. Historian Robert Rosenblum, who championed Pop ("a raw, visceral experience") was treated with disdain by Barbara Rose, Robert Hughes and artist Robert Motherwell. He describes this as a series of excommunications, "as though I'd left the Catholic Church."

Met museum curator Henry Geldzahler staged a show in 1969 that got him denounced, by the dumb, for appealing to NYs gay scene -- which opened a few months before the famous Stonewall riots in Greenwich Village. Earlier (1964) Susan Sontag published her Notes on Camp in the Partisan Review and she was now zigzagging through a new cultural minefield. Irving Howe, editor of Dissent, lamented that "we have now entered a period of cultural sleaziness."

A runaway bull market made Lichtenstein, Warhol, Rosenquist, Johns etc. famous, here and abroad. Art openings became social events no one wanted to miss. An orchestra had guests dancing at MoMA and there were diplomats at the Whitney. In the 60s, more than 250,000 New Yorkers, we learn, had arts-related jobs. After the flat, boring 50s, a liberating geni was "incubating within American culture" -- and when it popped out of the bottle, no one knew how to stuff it back in, or wanted to.