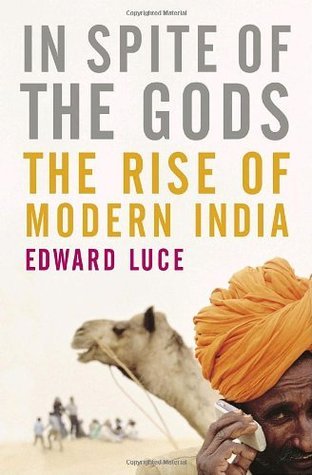 I was not very excited when I picked up this book (title hinted towards religious philosophy in India) but surprisingly this book turned out to be spell-bounding work on contemporary India. Even though Edward Luce has much of his background in financial reporting, he captured the philosophy and details of rising India quite beautifully. Edward Luce knows how India works and how the society moves here. The book is full of interviews with small and big names varying from Narendra Modi, Sonia Gandhi, Mulayam Singh Yadav to NGO chiefs such as Aruna Roy. Each episode and description is well researched and produced with stats and facts. Luce has touched upon almost every aspect of modern India ranging from 300 million poor to thriving IT Businesses, 40 years of single party government to coalition culture, India intrinsic security problems to its relation with United States and China. Luce discusses at length India's relationship with Pakistan and enlightens his readers with India's policy towards Pakistan. Edwards has written a lot about Hindu Nationalism in this book covering Babri Mosque demolition of 1992 and Gujarat riots of 2002 as a major turn of events in Hindu nationalism. He has not about any positive aspect of Hindu nationalism and I don't mind that because there isn't any. In many separate discussions, Luce has proved that much of religious talks in India are a result of political ambitions which is very true. The failure of caste politics to improve the conditions of the caste they were representing has been captured nicely by Luce, evident from his interview with Mulayam Singh Yadav, who was more interested in showing his lavishes then discussing the plight of UP population.
The books which only portray problems for readers are often incomplete and that's why Luce took care to suggest the actions that need to be taken in order to sustain this rapidly changing democratic country. With a clear understanding of India and its society, Luce has made this book the best ever written on modern India.